Hullo! What a fine day it is today. I even went bare-legged and I can happily say I haven't got hypothermia yet.

On Mothering Sunday (Yes, I know it was ages ago, I've been on holiday, all right?) I actually remembered, for once, and did something. I cooked! Now, I know what you're thinking. 'Gosh, Emily, what a hardship for you. How did you cope?' But really, you know, my mum's terribly fussy so it was quite difficult. She doesn't like meat or fish (apart from the occasional prawn butty) or anything excessively rich or cheesy, or anything vaguely oriental and soy-sauce-y. Now do you see? That's everything I love! How on earth do I cook something under those circumstances?

Handily, I was able to reach a fortuitous conclusion.  She loves curry. BUT. I was not going to cook curry. That would be too obvious. I went Morrocan. I plucked from the recesses of my brain a wonderful recipe I picked up when I was in Marrake -

Oh, all right. I just saw the recipe in Olive and thought 'Yeah. Okay. Cool.'

It worked out perfectly actually because in the end the spices smelled fairly similar to a curry (naturally she wasn't allowed in the kitchen) and so we led her down the wrong track. Do you see? My sister and I enjoyed it very much. 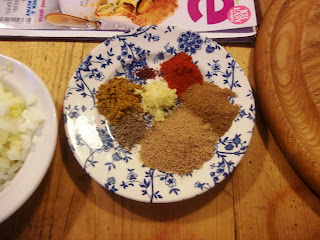 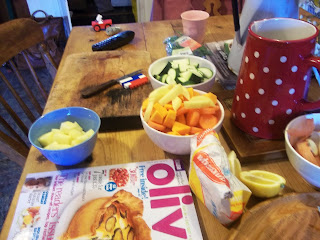 I'm not sure why the sugar's out.  But anyway.

I think the seven vegetables were potato, butternut squash, carrot, courgette, tomato, chickpeas and green beans. I think. I suppose I could just check on the recipe but that would be too easy.

It called for preserved lemon, which I didn't have. I don't think I've even ever seen them in a shop. But anyway, I found something - Oh! that's why the sugar's out! - that says you can sort of make emergency preserved lemon, as it were, by frying some sliced lemon in olive oil, salt and sugar. But I couldn't really taste it in the tagine, so I just shoved some extra lemon in too.

We had it with some couscous and some harissa and yoghurt. 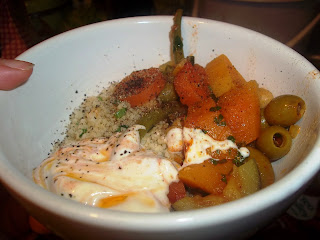 It was a bit runny, but it was really good. And it tasted lovely with the olives in, as well.


It also made a fabulous soup the next day, whizzed up with some cream. 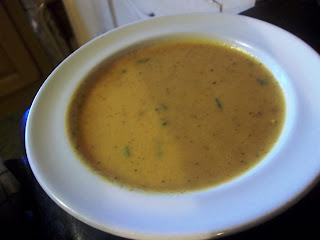 Add comment
Load more...
Newer Post Older Post Home
Subscribe to: Post Comments (Atom)
Almost everything is worth something. Eating at a Michelin-starred restaurant can be as good as beans on toast. A burger from the services on the way back from the cricket can be as good as the most expensive smoked salmon on Christmas Day. I don't believe that food has to be expensive to be good, even if that is often the case. Sometimes, food is just a sideshow. Sometimes, food is what holds people together. Sometimes, everything works - the people, the food, the atmosphere - and you remember that meal for the rest of your life.