Okay, so I know sometimes people may disappear for a while due to being busy, or lazy, or just having nothing to write about. 'Well, Emily,' I hear you say, 'What's YOUR excuse?' And, to be fair, I've been gone 179 days. That's a LONG time.

Well, my excuse is all three really. I was working a ridiculous amount over my summer holidays, and was therefore too busy to be anything but lazy in the evenings, and too lazy to cook anything interesting. It was a vicious circle. But I've broken the habit and I'm back! Yay!

I did have some brief respite, and that was when my family went on holiday without me and left me at my grandparents' house (best thing they ever did).  Me and my nanny cooked lots of lovely meals, and since it was the best I'd eaten all holiday, I'll use it for my first post.

The first thing we had was this risotto that my Nanny's been going on about for ages - you make a plain risotto with vegetable stock, with some peas and courgettes in it - very simple and whatnot, but then you top it with this mixture of feta, black olives, and parsley. 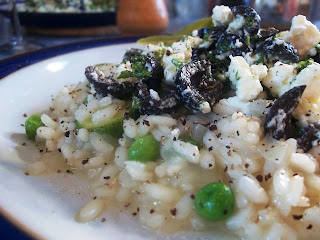 It was absolutely delicious. Like, ABSOLUTELY. The tangy-ness of the feta went so well with the risotto, it was almost bizarre how delicious it was. And I always love olives. I keep forgetting to make it, but actually I have some courgettes that need eating up and loads of parsley in the freezer, so watch this space...
We had a pizza and some salad that I thought was pretty, it was so colourful.... 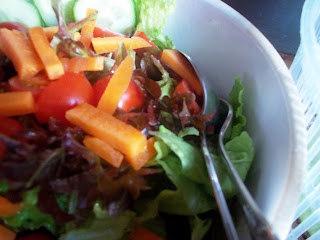 The pizza was bacon and mushroom - I really liked it, it was fabulously cheesy and the crunchy bits round the edge were super. The mushrooms did go a little bit watery but frankly (and don't tell any Italians) I quite like a soggy pizza. And it wasn't even that soggy. 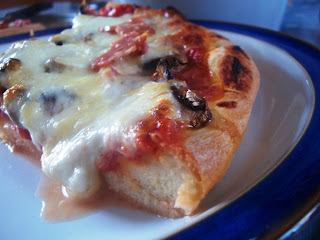 My Nanny has a recipe folder that I like to peruse, and this was one recipe that I'd always licked my lips over: 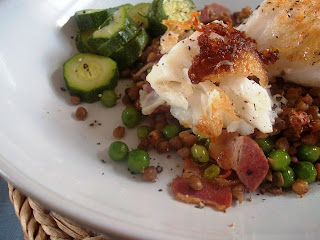 (I'm not quite sure what wrong with the picture. It went all grainy when I tried to upload it.) It's cod, on lentils and peas and bacon. Eee, by gum it were yummy.The lentils were especially delicious, and I'm going to try it with some salmon at some point soon.
Finally, I took my little recipe folder along with me in case there was anything Nanny wanted to cook. We chose a recipe that I'd copied out from somewhere ages ago; scallops with bean mash, roast tomatoes and bacon. (We like our bacon, have you guessed?) My Grandpa is on a low-cholesterol diet, and we'd just found out he could have shellfish occasionally, not never, as we thought before - so it was sort of a treat. 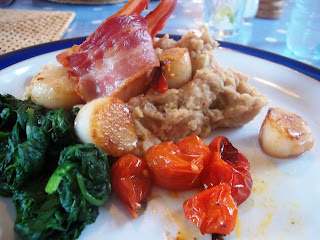 We had it with some spinach and it was SO GOOD. The bean mash had anchovies and garlic in it so it was really savoury and yummy. I only with we'd roasted more tomatoes!

So there you go, that was about the extent of edible fun from my summer holidays, and I'm back now! Don't expect a post every day, I'm taking four subjects this year and I'm on three committees so I'm pretty busy. Also I'm skint, so I'm just having beans on toast or soup or pasta'n'pesto lots of nights. But I'll post as much as I can, and I promise I'll never disappear without explaining why again!
Posted by Emily at 12:27 1 comment:

Email ThisBlogThis!Share to TwitterShare to FacebookShare to Pinterest
Newer Posts Older Posts Home
Subscribe to: Posts (Atom)
Almost everything is worth something. Eating at a Michelin-starred restaurant can be as good as beans on toast. A burger from the services on the way back from the cricket can be as good as the most expensive smoked salmon on Christmas Day. I don't believe that food has to be expensive to be good, even if that is often the case. Sometimes, food is just a sideshow. Sometimes, food is what holds people together. Sometimes, everything works - the people, the food, the atmosphere - and you remember that meal for the rest of your life.